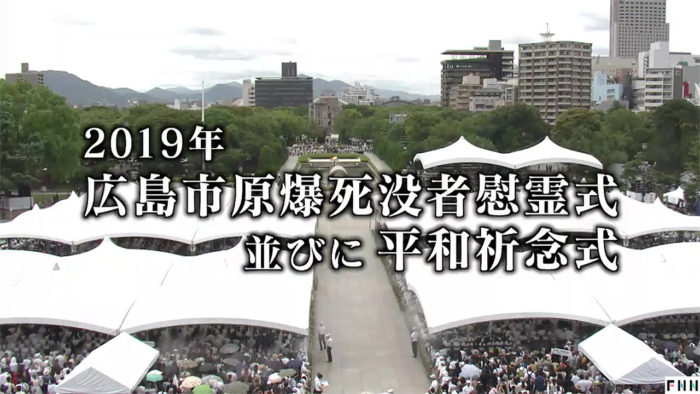 Hiroshima city wishes realization of nuclear weapon extinction and the world lasting peace as well as mourning to atomic bomb victims and does a peaceful commemorative ceremony on August 6 every year, and Mayor Hiroshima is releasing “peace declaration” for the world. Being no cases that people of the world experience a miserable experience in Hiroshima and Nagasaki again, I’ll also keep appealing to peace declaration a nuclear weapon will be lost from this earth top, and to establish the peaceful world which continues forever now.

An own country first principle rises in this world world, and an exclusive opposing movement between the state raises a strained relation, and a movement to nuclear weapon extinction is also delaying. How does everyone catch such world situation? We turn to once again remembrance and human continuation that our superior who experienced twice’s world war promised building of an international framework of cooperation aiming at the ideal world which never causes a war, and isn’t it necessary to aim at the ideal world?
I’d like to complain to the young person who doesn’t know the war which carries the next generation in particular of this thing. And I want you to hear voice of the survivor of the atomic bombing who also experienced August 6, 1945 for it.

The lady who was 5 years old is composing such song then.
“The one of the bobbed hairIn the vanity way RURU splash of blood My younger sister.I come, and, my mother?NI”
The man who experienced a terrible sight as “The people who can’t classify men and women could bake clothes, and the nude was addicted, and same. A lip, an ear and a torn person and skin of a face ran away from an eye without hair, and was hung, the whole body, bloody person and person.” by 18 years old is complaining “You’re never supposed to make people in posterity experience such thing. He had enough these our pain only by us, thank you.”
Has everyone received such appeal of the survivor of the atomic bombing who keeps getting injured serious in the mind and body which survived?
When I say “Even if a person’s of man is powerless small, it’s that an individual wishes for peace, and I believe that it’s possible to stop Tsutomu who tries to cause a war.”, may a principle of the lady who was 15 years old be brought to an end in a just wish?

Even if a person’s of Tsutomu is small when he turns his attention to the world, when Tsutomu of many people concentrates, there are many cases a wish achieves. Indian independence is one of the cases, and Gandhi who contributed independently leaves such word via a severe experience hotly.
“Itself is one form of the violence, and intolerance disturbs growth of true democratic spirit.”
We have to have the heart of “tolerance” that an individual gets over the difference between the viewpoint and the insistence each other and makes an effort together aiming at an ideal for the continuation to achieve the possible world at Heiwa without turning the back on the current state.
Voice and an effort of the people the young people who carry the future don’t catch an atom bomb and a war with an affair in the just past for it also who aim at a survivor of the atomic bombing and the peaceful world, it becomes important to be moving ahead without sagging as oneself’s.

And a ruler of all over the world has to move toward the ideal at which civil society aims together. A bomb site is also visited for it and voice of a survivor of the atomic bombing is heard, and could you be confronted a life of a victim and a bereaved family individual at Peace Memorial Museum and a mourning peaceful prayer house?
When nuclear competition was intensified formerly, and the tense position rose, it’s in nuclear disarmament by an expression of “reason” and a dialogue between the U.S.-Soviet two nuclear large countries.Could you recall that there was a superior who has the courage O cut?
Hiroshima city is putting the emphasis on the environmental development which supports ruler’s behavior to the nuclear abolition with that civil society shares “Hiroshimas’s heart” widely with a joining city of Mayors for Peace of about 7800 now. Could a ruler of all over the world respond to the expectation of the civil society which achieves sincere duty to bargain of the nuclear disarmament set as a Nuclear Non-proliferation Treaty 6th article as well as asks coming into effect of the Nuclear Weapons Convention which becomes a milestone to the world which has no nuclear weapons?

During such, could Japanese Government catch expectation of the survivor of the atomic bombing who asks a signature to Nuclear Weapons Convention and ratification tightly as the only war nation that was the victim of atomic bombs? You press down on one step more, and could realization of the world which has no nuclear weapons show leadership to embody pacifism of the Constitution of Japan on it? The average age nestles close to anguish of many people who hold various pain with a living face by the radiation which affects a mind and body including a survivor of the atomic bombing beyond 82 years old, and the aid package is enriched as well as I ask to expand “black rainy rainfall area” hard.

I promise that a truth of a sorrow is offered to A-bomb victim’s spirit of the dead person sincerely in case of a peaceful commemorative ceremony of 74th anniversary of bombing as well as Tsutomu as well as bomb site Nagasaki and the people of the world who do concern likewise are done for realization of nuclear weapon extinction and the world lasting peace which is ahead of it today.